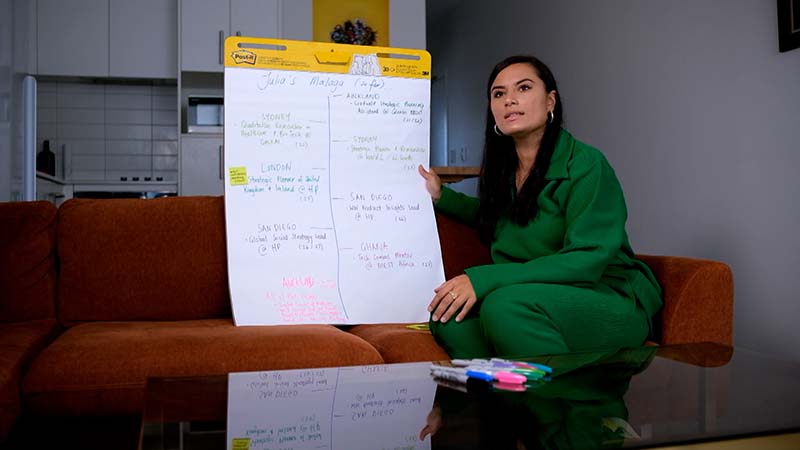 Then, in 2021, Julia was appointed to the Digital Council for Aotearoa, which provides independent advice to the government on digital and data-driven technologies.

She is the only Pasifika member. Julia is of Sāmoan, Chinese and British descent, and twenty-nine years old.

Julia’s fast track to success began at twenty-four when she landed the role of Strategic Planner for the United Kingdom and Ireland, for Hewlett Packard, working in their London office.

“That forever changed the trajectory of my life,” Julia says.

Within two years Julia rose to become Hewlett Packard’s Global Social Strategy Lead. But while her career flourished, on a more personal level, she felt a growing deficit.

“From a values and moral point of view, I found it really empty,” Julia says.

“Being in these hyper-mega cities, these profit-driven mega organisations, like 50,000 people across the country, was very difficult. My values and how I was brought up, started to get louder and louder inside of me.”

The values Julia was brought up with are about service, people, and justice.

“Service, or tautua, has really actually come from my mum, alongside it being an inherent value of Pacific culture,” she says.

“My mum made huge sacrifices in her career and who she is to fight for justice for other people. Last year she was actually awarded a Queen’s Honour for the work that she’s done with the Pacific communities and with the environment.”

It was seeing her mother, Jane Arnott, make sacrifices that led Julia to consider a technology career in the first place.

“A big reason I pursued technology,” she says, “was to be able to pay my mum back. How was I going to be able to look after her?”

I looked at technology and I was like, ‘well, this is growing.’ People are getting paid really well in this space. You don’t need big A-pluses. So I guess I’ll go try and get into that one.”

Around the same time Julia landed the role at Hewlett Packard, she started reading about the problem of digital inequity.

“If you are already being disenfranchised or marginalised in society, technology and digital technology only deepens that.”

Julia took her first step towards what would later become her new, purpose-driven career, “I emailed Jacinda Ardern on LinkedIn of all things.”

I asked her, ‘what are you doing to protect and future-proof those who are most at risk of being left behind with the advancement of digital technologies?’”

“So the future sits within this industry, and yet, it’s an industry that is lacking a lot of diversity and equity in how it’s structured and who can thrive and define what the industry looks like.”

PeopleforPeople commits to working with young Pasifika and Māori people, taking students from South Auckland into the gaming, engineering, technology and creative industries to show them “the world that they could be part of if they choose to,” Julia says.

It’s clear in her enthusiasm that these interactions provide the substance she’d been missing. “There’s this sort of curiosity, and just sort of an awe of like, ‘Oh, whoa. So you can do that? You can get paid that?’”

“Then there’s also a level of scepticism too, right? Like, ‘Are these places safe for us? Do they really want us? Are we allowed in there?’ Which is totally justified. The combination of those two things is really epic to be around.”

Julia’s appointment to the Digital Council for Aotearoa New Zealand marks five years since her first LinkedIn email to Jacinda Ardern. For Julia, it’s a new career highlight, but also just the start of her next journey.

“It’s a stepping stone, but it is not the outcome that I’m looking for,” she says.

“That is to see us creating the futures that we want to see in this industry. It’s no longer us wanting a seat at the table. It’s us redefining what that table looks like at its core. It’s not probably not even a table. It’s a space for us to belong and for us to thrive in.”