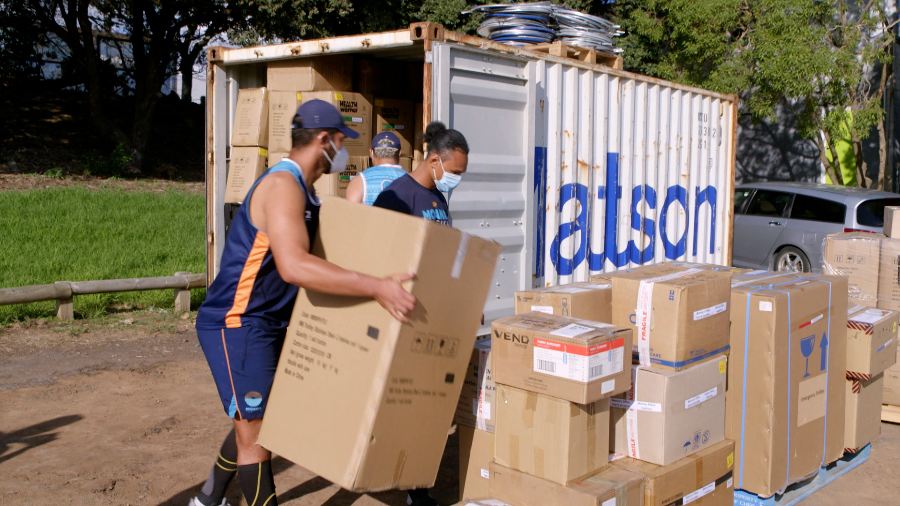 With help from the New Zealand Government, the Pasifika Medical Association (PMA) recently sent a group of medical professionals to Tonga to help with mental trauma following the January eruption and tsunami.

“We sent up a mental health team of eight to Tonga to just help people there get through what’s happened,” says Jouvell Ngature, who is an Emergency Response Officer for the PMA.

“The whole team is Tongan and it meant a lot for them to go back home and help their people, help their family and communities there.”

The container being filled by the rugby players include donated medical equipment as well as medical supplies purchased with money raised by the community.

“We had an overwhelming response of people who wanted to donate mostly equipment and we have had monetary donations that we were able to go out and get some of the bigger items for Tonga.”

For some of the Tongan Moana Pasifika players, they’re grateful supplies can get to their families back home.

“My father’s village was really affected on the Hihifo side of Tonga in Kanokupolu, I think my uncles and stuff have moved out of the village so there’s more reason to here than not to be here.” Says Moana player player Isi Tu’ungafasi.

“My Dad and my mum they are good because we got to send some stuff over with the help of Michael Jones and that with sending containers over to Tonga,” Says Finau

“So right now they’re really good with food and that. it’s just, I guess, home and shelter was a bit, all flooded.”

Talanoa: Cook Islands backs its Covid response as it invites tourists back