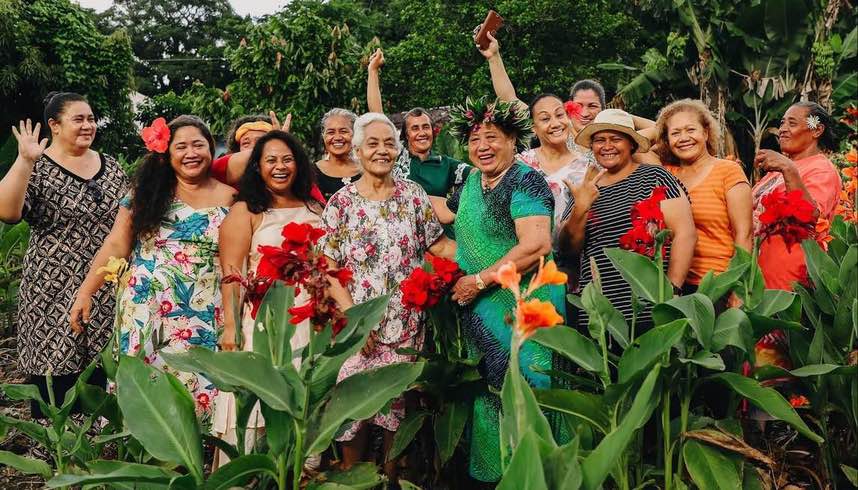 Samoan women farmers have championed the world of agriculture, and the Samoan Women’s Farming 2022 calendar is a great way to highlight their hard work.

The calendar is part of an ongoing fundraiser to help 12 hardworking women farmers build their own cocoa dry house and purchase fermenting equipment to help improve their on-farm processes for export quality cocoa beans.

The farmers are part of the Ms Sunshine Organic Farms  (MSOF) a charitable organisation based in Tuana’i, Upolu, and it’s led by none other than the esteemed farmer/cacao entrepreneur Floris Niu.

MSOF was birthed out of Niu’s need to heal and to prove doubters that farming can be a great career for women.

After Niu suffered from mental and physical illness in 2013, she returned to Samoa to find a new purpose in life. It was her curiosity of exploring how food was made and her ideas of organic farming that led her to create MSOF.

“I guess you can say this has been part of a health journey,” she says.

But her journey wasn’t all smooth sailing.

As a single, divorced woman with no formal qualification in agriculture, Niu faced discouragement from her own family.

“One of my brothers called me and told me I was wasting my life and education on the farm — having gone to university and had this whole life in New Zealand only to put my hands in the dirt and suffering like our parents did on the land,” she says.

“Part of me wanted to believe that, but the other half of me knew better. [I believed] people like my parents did not work the land in vain.”

Being a woman in a male-dominated field, Niu noticed how men were praised for “doing the next best thing” to make a quick buck.

“That approach always comes across as supporting the family, but in reality, it has no reflection on mother nature and what we need to do to protect it,” she says.

“The biggest lesson that the land has taught me so far is to be gentle with it.”

“We are at a greater risk of running out of food if we don’t change back to farm the way our ancestors did.”

Niu aims to push the government to create educational opportunities for women, especially teen mums and those going through hardships.

“Women and girls don’t need to go through a breakdown like me to realise that their calling is the land,” she says.

“We need government to create scholarships for girls and women to study agriculture and alternative farming. [Teen mums] need another attractive offer other than just becoming a teen mum because [they] didn’t do well academically. There should be more vocational options to help them learn a craft that is accessible on their own land.”

Niu pinpointed that many young people in Samoa are just waiting around for a fancy job in Apia with air conditioning, when they can achieve financial control by farming on their own land and owning their own business.

Alongside the calendar, Niu and her team have published two farming guide publications produced under MFAT and DFAT projects. They also planned on creating their own chocolate by 2020, but their plans were halted due to the Covid pandemic.

The Samoan Women’s Farming Calendar fundraiser is hoping to reach a goal of $40,000 by the end of the year, and there are 2500 copies left.

The initiative is part of an agritourism component project called “Improved Livelihoods”, supported by the New Zealand Aid Program (MFAT) and implemented by SPS Biosecurity NZ.