HomeCommunitySamoan youth leading the way to vaccinate the community 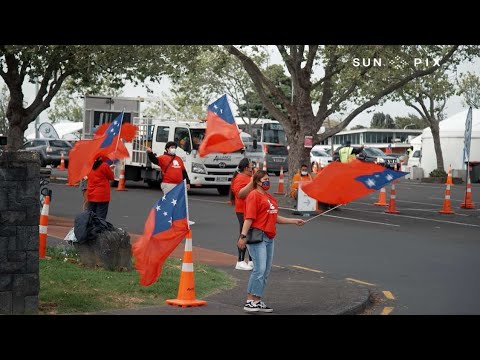 Samoans make up the single largest group of Pacific People in Aotearoa, and in these past few weeks they’ve been holding vaccination events across Auckland City for their people. One such event was held in Manurewa recently, and it was the local Samoan church community which got it going.

“We wanted to set a vibe early on in the beginning, and we wanted them to feel welcome, and so we’ve brought it out so that they feel like this is a place they can come to. And it’s worked so far,” says Youth Coordinator Sera Potifara.

The church, the community and young people all chipped in.

Event Coordinator Saoatulagioletagaloa Penina Ifopo says, “From 6 o’clock this morning they were out here doing the flags, keeping the promotion team going. So that’s a big job, but it was very possible because of all hands-on deck.”

“I know the drive in the last few weeks has been Māngere and Ōtara and, of course because of the cluster, in Māngere,” Pastor Ponifasio says.

“But as a resident of Manurewa, I’m thinking, ‘What about us over here?’ Because we have a large percentage of Samoan people living here, and when I saw the stats — there’s about 11,000 Samoans yet to be vaccinated — I thought, ‘I’ve got to do something.’”

Potifara says getting young people on board was a big part of this effort.

“It’s very important. Some of us have elderly at home, we have children at home who can’t get vaccinated, and you know, do it for them. And if not, do it for yourselves so that we are here longer, we can serve our community longer and serve our families.”

Like other community-led drives, a familiar language, culture and faces helped bring people in.

“When your own people see you, other Samoans leading this at the frontline, they will come. They’ll be encouraged to come because they have that connection and really, they have that trust that you can speak the language; that’s because you live in the community, they know you from other places,” says Saoatulagioletagaloa.

And it was certainly appreciated from those who lined up to get vaccinated. One family of five were happy their grandmother could understand what the nurses were explaining to her in Samoan.

Another resident with two adults and a teenager says, “I’m already double vaccinated; we just came here to bring our son. And I think it’s a great thing for the community to come together and do this. I’m not even Samoan; I’m Tongan. It doesn’t matter where you’ve come from.”

While recent community-led efforts have helped boost Samoan vaccination numbers, there are many holding out. And it’s a concern to people like Pastor Ponifasio, who’s heard about some of the conspiracy theories.

“Don’t be misinformed. I want to speak from a church minister’s perspective, because I know with conspiracy theories and perhaps misinterpretation of scripture. That has been one of the barriers that we have today,” says Pastor Ponifasio.

“Somebody rang me and said, ‘I’m scared of this vaccination, because everything I read online is about the mark of the beast.’ And so I said to this person, ‘Have you read your Bible?’

“You figure that one out, and it’s not a mark; it’s a vaccination, it’s an injection,” says Pastor Ponifasio.

Community-led vaccination drives will continue in the coming weeks or when sufficient numbers have been vaccinated. Until then, those who haven’t had a jab should seriously consider it.

“So it’s really good to re-think the impact of your choice by refusing to take the vaccination, (the impact) on your elders at home and children and work colleagues and your church. Protect your community that you love.”