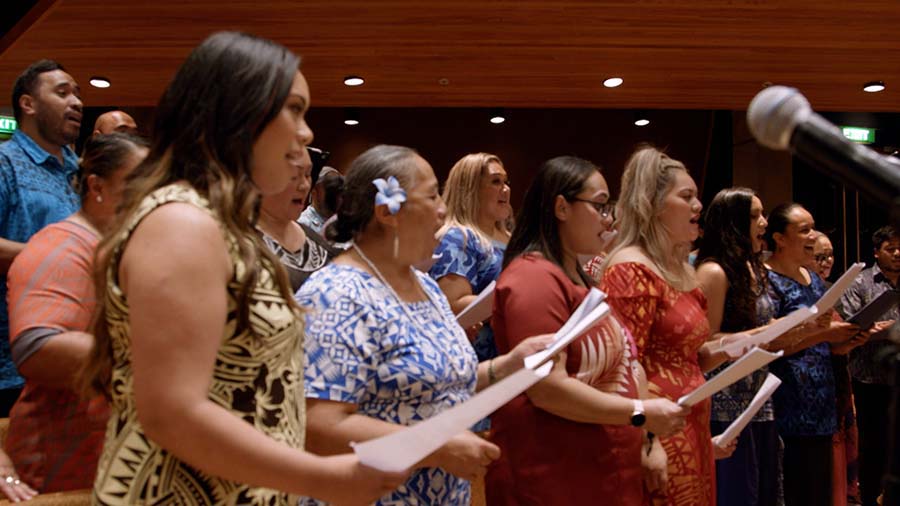 At the Michael Fowler Centre in the capital recently, the New Zealand Symphony Orchestra (NZSO) and the Wellington Signature Choir have come together for another rehearsal.

The two groups had been planning to perform together in May but Covid has meant a re-schedule until the end of the year.

“We are thrilled to be able to rehearse with them tonight, we’ve had to push the actual recordings and the live show into the end of November because of covid,” Says Kirsten Mason, NZSO Director of Artistic Programming, Innovation and Audience Engagement.

“But we’re delighted to be rehearsing these beautiful songs from the islands tonight. This is the start of a beautiful partnership.” 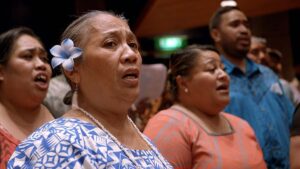 And it’s a partnership Signature Choir Musical Director Fepulea’i Helen Tupai has poured her heart and soul into.

“This project, Mana Moana, mana – if you are Pacific, you know that word has a lot of connotations – spirt, scared, power,” says Fepulea’i.

“I think that we stand on the shoulders of our parents that have gone, our grandparents, so the mana comes from them and the Moana being the sea. The sea connects all the islands.”

Fepulea’i has had to assemble a large enough multicultural Pasifika choir from Wellington for the project.

“Signature Choir is actually a smaller choir, we have 24 original members, but due to this project with the New Zealand Symphony Orchestra, they’re twice the size of the orchestra that we’ve been working in the past, so we have a choir of 50,” she says.

“The songs that we have chosen are from Tonga, Samoa, Niue, Tokelau, Fiji and Cook Islands and  are iconic songs that resonate with each island.” 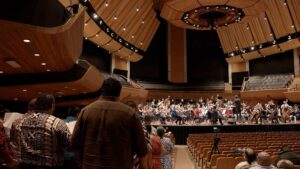 Shalleen Hern who is in the Signature Choir is ecstatic about being a part of history.

“It’s amazing, it’s the first time its happened, the collaboration of an amazing Pacific choir, not just one Pacific language but many Pacific languages and songs being sung together with the might of the New Zealand Symphony Orchestra. It’s electric and it’s a privilege to be part of it,” she says

Looking on at rehearsals is Hon. Carmel Sepuloni, Minister of Arts, Culture and Heritage. She says it’s a collaboration that’s long overdue.

“Our pacific community is so obviously talented with regards to music. It’s important that we do have collaborations like this where there traditionally haven’t been collaborations and I’m really excited about what else will come next after this,” says minister Sepuloni.

The rehearsals will continue for the rest of the year fine-tuning the performance for the concert on the 1st of December.