HomeEntertainmentYoung, brown and proud wins big at the Impact Awards 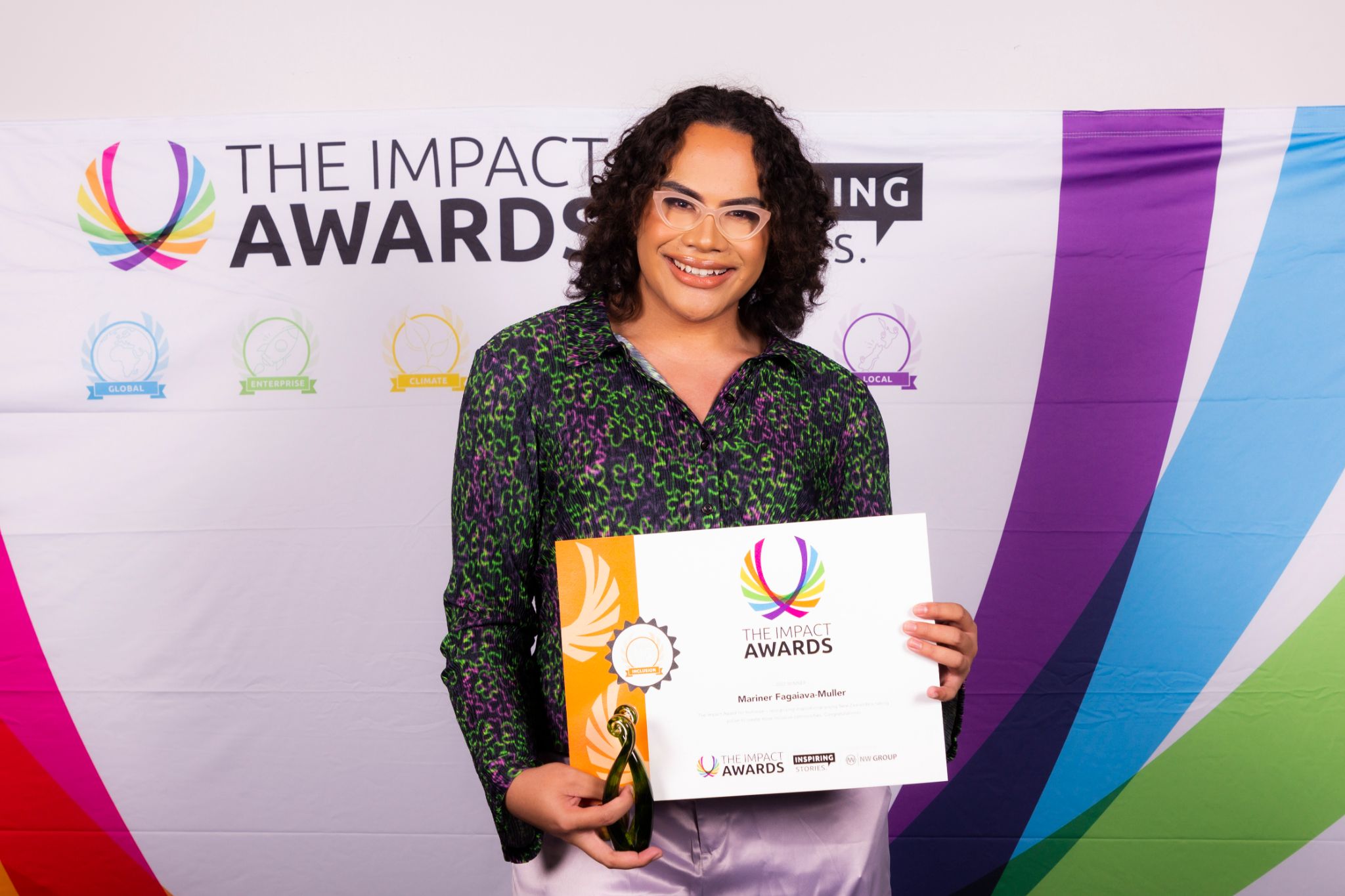 South Auckland-raised Tongan/Samoan journalist and digital content producer Mariner Fagaiava-Muller is the winner of the Inclusion Award for his work creating greater representation in Aotearoa newsrooms, at this year’s Impact Awards night in Pōneke.

“I feel quite surprised that I actually received the award. I didn’t think that I would get it. There were a bunch of mana wāhine who were finalists in my category so I mihi to them and all the important work that they’re doing in their respective sectors,” says Mariner.

“I’m feeling quite chuffed and emotional because my family isn’t here. It’s a moment that I would have loved to share with them but I know that once I get home it’s all on. We’re having a feed!”

He says he is particularly interested in the psychological impacts of the mainstream media’s depiction of Māori and Pasifika people.

“When I was a kid, I didn’t see myself on the news. I didn’t hear myself on the radio. I never read about myself in the newspaper. And when I did, it was bad news. So that’s what drove me into working in the sector.”

Now a digital content producer for Tikilounge Productions, Mariner had aspirations in the news media from a young age.

“I remember when I was 14, I rang up A.U.T and I was like, ‘hey, I want to know what subjects I need to take now to ensure that I get into journalism school?’ They thought I was a little bit gung ho. A little bit too keen for journo school.”

“I knew it was my responsibility, an act of tautua that I had to pay towards my people. And that’s not just Pacific, it’s not just Māori. It’s all ethnic peoples. And that’s what drove me to be that adequate representation and news media.”

“I also think of John Campbell. Pākeha allies in this space who really create safety for Māori and Pasifika in the sector because it can be quite volatile. If you aren’t protected by higher-ups there that can be hard to navigate. Props to people like Simon Dallow, Hillary Barry, people in high respectable positions of power within journalism who really give space to Māori and Pasifika.”

By canvassing stories with alofa and supporting positive depictions of Pasifika in the media, Mariner hopes that more rangatahi will follow in his footsteps.

Speaking to his younger self Mariner says, “Everything you want us on the other side of hard, so keep grinding! I know you’re gonna work a lot of early mornings, late nights. A lot of graveyard shifts I did at TVNZ but all in all, it’s paid towards my kete of skills that I bring to the industry. Storytelling is in my blood, but those practical skills that I’ve learned in the workplace are also so necessary and got me to where I am now.”

He lives by the popular Samoan proverb, “O le ala i le pule o le tautua.” (The pathway to leadership is through service)

“I think that if you feel that you’re above service, then you’re beyond leadership. That’s what I live by and never is it for the fame or the influence. It’s about sharing stories, and that’s at the heart of the kaupapa of journalism which our Māori and Pasifika people do so well.”