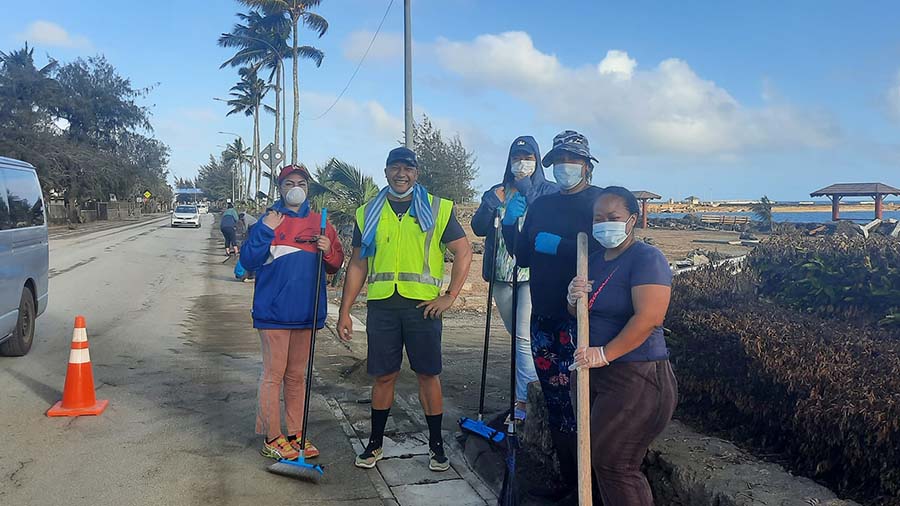 With Digicel announcing they’ve established 2G connection for their customers in Tonga, images have started to emerge of what Tonga truly looks like from the ground.

Landmarks like The Basilica of St Anthony of Padua (pictured above) with its distinctive white roof now bears the aftermath of the January 15 eruption.

The usually colourful capital of Nuku’alofa is now awash in dust and volcanic ash.

But activity hasn’t stopped, clean-up efforts began earlier this week with reports of locals taking to Fua’amotu Airport with taufale (brooms) to clear the runway for planes laden with aid and support.

Tourist hot spot Ha’atafu Beach Resort in Tonga’s Hihifo district sustained severe damage along with the coastline and other villages in that area.

Operated by Moana and Hola Paea, Ha’atafu Beach Resort is one of Tonga’s well-known holiday and tourist hot-spots.

Moana’s brother Alan, who resides in New Zealand, managed to keep the resort’s Facebook page active with updates of the staff.

“From the time of the explosion to the tsunami hitting, they only had 10-15 minutes,” Alan wrote.

“Moana, Hola and the kids managed to get all the guests out safely, however this meant they had no time to save anything at all.

Residents in this area were eventually evacuated to Liahona where temporary camps have been set up for evacuees.

Alan has also set up a GoFundMe page to support the resort staff during this time.

Elsewhere, people begin the ominous task of clearing their homes and businesses of debris pushed inland by the tsunami waves.

Damaged houses, crumbled rocks and flattened vegetation are a stark reminder that the Pacific doesn’t always adhere to it’s given name.

Despite this, smiles and good spirits appear on the faces of those currently cleaning the capital.

It will be a mammoth task of restoration for a Kingdom still recovering from the effects of Cyclone Gita but with that signature resilience and can-do attitude, we will overcome.

Hercules departs for Tonga carrying aid and other supplies