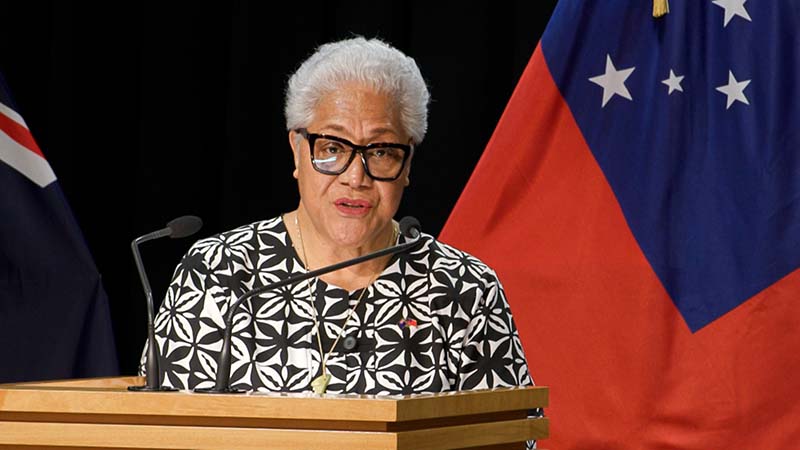 In the year her country celebrates 60 years of independence, Samoa’s Prime Minister Fiamē Naomi Mata’afa made her first official visit to the New Zealand capital.

New Zealand Prime Minister Jacinda Ardern welcomed her Samoan counterpart to the capital city with a special ceremony outside the Beehive on Tuesday.

The occasion marking a long friendship between the two countries that dates back six decades.

“As a close friend of New Zealand over the past 60 years I am delighted to welcome Samoa’s prime minister on her first official, bilateral visit since being elected,” Ardern said.

Samoa celebrates 60 years of independence this year, it also marks 60 years of diplomatic relations between Samoa and New Zealand.

“I am happy to see that in our first face-to-face engagement we have been able to cover a lot of ground from issues of national interest to regional and multilateral agendas,” Fiamē said.

On the agenda for the meeting key areas affecting both countries starting with Covid-19, Ardern keen to emphasize New Zealand’s supportive role.

“We’ve shared our experiences of managing covid-19 and its health and economic impacts, New Zealand was pleased to support Samoans vaccination campaign along with a range assistance including rapid antigen tests, technical assistance and increased budget support,” she said.

“New Zealand and Samoa will work closely together as our countries take further strides towards reconnecting our peoples and helping to boost economic recovery including the tourism sector.”

The leaders then moved on to regional issues following China’s controversial security proposal to Pacific islands states including Samoa, Fiamē saying the best place to discuss the proposal was at next month’s Pacific Forum leaders meeting in Fiji.

Another concern for Samoa was the loss of workers to Australia and New Zealand under the Recognised Seasonal Employer (RSE) scheme.

The new Samoan administration will review their seasonal worker scheme recruiting process and have already started reducing flights for workers out of Samoa.

“We now find from the public service to private sector, our manufacturing and tourism sectors have begun to be quite vocal in terms of the loss of human resource through the RSE,” Fiamē said.

Another milestone for the two countries after 60 years is the signing of the Treaty of Friendship where Samoa will commemorate this on the first of August, when they open their borders to international visitors.

“I formally convey to you an invitation for a delegation from the New Zealand government to travel to Samoa where we can hold a commemoration on that day and we look forward to welcoming the New Zealand delegation and I am hopeful you might have time to come too.”