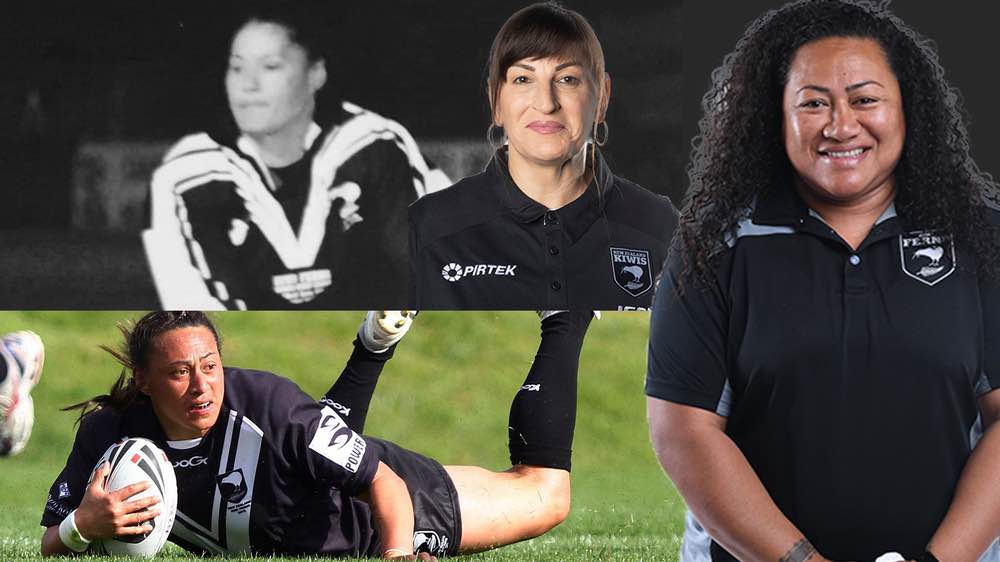 For the first time in its history, the NZRL has inducted four Kiwi Ferns to its prestigious Legends of League.

The key criteria to be recognised for the Legends of League were longevity, leadership, achievement, and performance at international level (first and foremost), as well as club and provincial level; enhancing rugby league’s standing in New Zealand; and post-playing contribution to the game.

Having been retired for at least five years – a directive since the establishment of the Legends of League in 1995 – remains a requirement.

Luisa Avaiki’s inclusion as one of the first four Kiwi Ferns Legends of League was never in doubt. She is one of just three players to feature in New Zealand’s first three World Cup triumphs and was the only 1995 original still playing when the Kiwi Ferns carried off the 2008 title.

Meanwhile, the front-row powerhouse’s role as captain of the 2003 and ’08 World Cup successes underline her status as one of women’s rugby league’s finest leaders. She currently has a highly successful career in coaching and development post-playing.

Another 1995 original, Nadene Conlon is admired for her tireless performances as a backbone of the Kiwi Fern’s pack. The 2000 World Cup winning co-captain has spent more than two decades working in rugby league coaching, development, administration, and management with Auckland Rugby League, the Warriors and NZRL, while few have done as much to drive women’s rugby league’s progress.

Trish Hina is recognised as one of New Zealand’s greatest sportswomen. She has represented NZ in rugby league, rugby union, touch football and softball. But she undoubtedly made her biggest impact in the 13-a-side game.

Leach Witehira was a prominent figure on New Zealand’s trail-blazing tour of Australia in 1995 and later formed a stellar halves combination with Hina as the Kiwi Ferns won the first two World Cups. Witehira was a prolific try-scorer at international level, a steady playmaking influence and key leader as the Ferns cemented their status as the dominant force in women’s rugby league.

Ruben Wiki and Stacey Jones narrowly missed the five-year retirement cut-off when the last batch of Legends of League were inducted in 2013 – and their inclusion this time around was essentially a fait accompli.

The long-time Kiwis teammates have played a total of 101 Test matches between them from the 1990s to 2000s. They are the only New Zealand team of the Century selections to receive Legends of League recognition. In 2019, Wiki and Jones joined Mark Graham as the only New Zealanders in the 2019 NRL Hall of Fame.

The 35-test Kiwi Quentin Pongia passed away in 2019 from cancer at the age of 48 and the outpouring of emotional tributes from every corner of the rugby league world reflected the esteem in which he is held in the game.

He was widely known as one of the toughest and most durable and uncompromising forwards of any era, the West-Coast bred, Canterbury provincial rep and Canberra Raiders premiership winner, was a Kiwis engine-room cornerstone from 1992-2000 and captained New Zealand to Test series glory in Great Britain in 1998.

Kevin Iro adopted the moniker “The Beast” which illustrated the powerful impact he had as a blockbusting centre and winger for the Kiwis for more than a decade, and on the British and Australian club scenes for 15 seasons. He scored 16 tries in 34 Tests from 1987-98 and starred in a host of Challenge Cup and Super League grand finals with Wigan, Leeds and St Helens.

The remaining four Kiwis Legends of League places went to key figures of the Kiwis’ halcyon 1980s era that featured so many ground-breaking victories.

The ultra-versatile James Leuluai played Tests in four different backline positions – but it is as a brilliant, elusive centre that he is chiefly remembered. A breath-taking sidestep and blinding acceleration garnered 14 tries in 29 Tests.

Dubbed the ‘Rolls Royce of wingers’, Dane O’Hara was a prolific try-scorer – including 14 touchdowns in a then-record-equalling 36 Test appearances for New Zealand – but was equally revered for his professionalism, dedication, and leadership. He captained the Kiwis against Australia in 1980, a rare feat for a winger.

Taranaki hooker Howie Tamati played the last 19 of his 24 Tests for the Kiwis in succession, captaining his country against PNG in 1983 and won over Australia and Great Britain. He later coached the Kiwis in 1992-93 and began a long tenure as NZRL President in 2013, a post he continues to hold with pride and enthusiasm.

Sir Graham Lowe has broken new Legends of League ground as the first inductee (aside from referee John Percival) without a prominent playing background. After cutting his teeth at Ellerslie in the 1970s, Lowe became one of the most influential and revolutionary figures in the code’s history in New Zealand. The national team’s outstanding results under Lowe’s tutelage from 1983-86 heralded a turning point for the Kiwis, while his achievements and status as a club coach at Norths Devils, Wigan and Manly Sea Eagles, as well as State of Origin level with Queensland, are virtually unmatched by a New Zealander.

New Zealand Rugby League congratulates the 12 new members of the Legends of League – a richly-deserved honour for some of the Kiwis’ and Kiwi Ferns’ best ever.