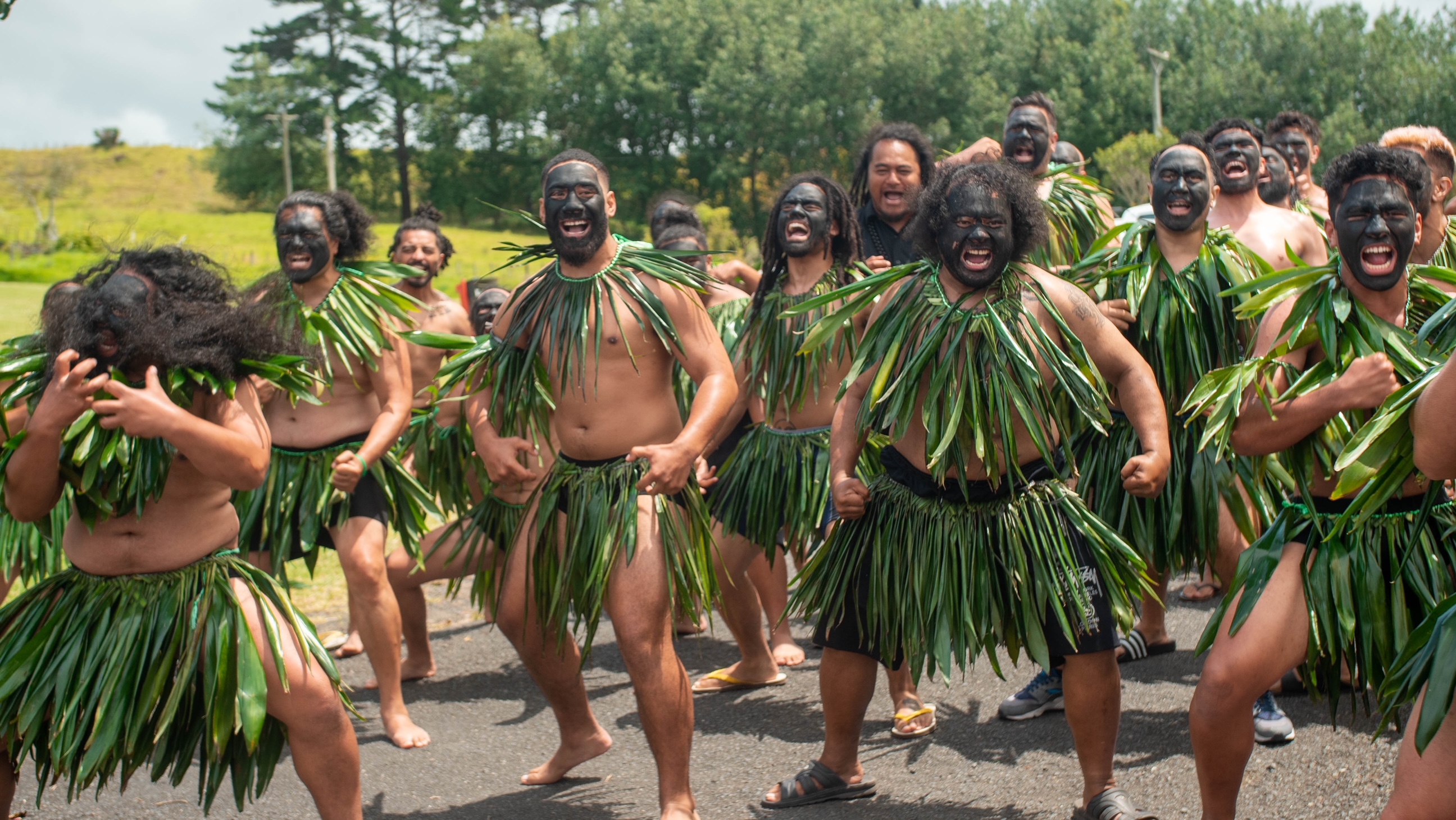 A group of 40 Niue men have released a new takalo, or traditional war dance, with a challenge to keep their language alive.

Composed by Lavea Puheke and filmed at the historical Māori land site Ihumātao in Auckland, the performers, dressed in traditional tī leaves, can be heard chanting in vagahau Niue, “It is the battle – to challenge the elevation of the vagahau Niue.”

“May it be firmly grounded and secured, and let it dwell in your hearts endlessly.”

The takalo has received over 12k views since its release on Wednesday on the Niue Youth Network Facebook page.

The performers are a part of a group initiative for New Zealand-born Niue men, formed by Auckland-based youth worker Asetoa Sam Pilisi.

Pilisi says the takalo is a “solutions-based project” to address language loss and cultural disconnection in his community.

“Myself and many of my other peers that work in different spaces probably note that when it comes to lots of Niue cultural events be it happening within church spaces, village spaces – we see lots of little kids, mums, aunties and then we see the old men but there’s a noticeable absence of men, teenage men and adult men, so for different reasons they don’t really come.”

For youth, Pilisi says that cultural events such as the annual high school Polynesian festival Polyfest was one of the main vehicles where youth learnt to sing, dance and connect with their traditional practices, but after school there was nothing for them to engage in.

“We made a deliberate attempt to try and capture as many Niue adults, rather than exclude the teenager but we knew that come next year there will be Polyfest and other things where they can engage with the culture so that’s where the purpose came from and why we pulled out a selective group within our community to try and engage with them.”

After establishing a Facebook group for the initiative in August, Pilisi says it’s membership “ballooned” from 20 in the beginning to over 500 in a matter of weeks. While not all were able to participate, Pilisi is grateful for the network.

Joseph Tavita Ofotau, who descends from the villages of Mutalau and Lakepa, is a clinical social worker in Auckland. Despite having a “Pālagi” upbringing, the turning-point to reconnect with his culture came while studying for his career path.

“It’s not until I studied social work, you have to get to know yourself and then that’s when I did my journey into my cultural identity.”

He has since taken up Niue language classes. But while the journey hasn’t always been easy, he says the group has given him a place to express his identity.

“It was really interesting because of the whole Niue thing of masculinity, I had my own experience with my journey through masculinity, sexuality, all that kind of stuff so it’s not really accepted by Niue culture but doing this really felt empowering to be a part of something and not be judged. It felt really amazing.”

Growing up in the suburb of Papakura Vilitau who hails from Alofi and Hakupu, says he saw very few tagata Niue in his neighbourhood. Instead he was “heavily influenced” by his Māori and Samoan friends at school.

“I think this project was important for me because there’s just a side of me wanting to get to learn a bit more” says Vilitau.

“Because I’m 36 now, it’s like I better do it cause it’s way too late now so I’m thinking now’s the time. It’s better late than never so that’s why I joined the project.”

17-year-old Mt Albert Grammer student,  Nofolisi Hala of Tamakautoga and Hikutavake, is a fluent speaker of vagahau Niue. By joining the group and learning the takalo he hopes to inspire and encourage other youth to connect with their culture.

Tongans garden for their community