HomeNews & TalanoaIsrael and John Folau return to Rugby League and will play for Mate Ma’a Tonga. 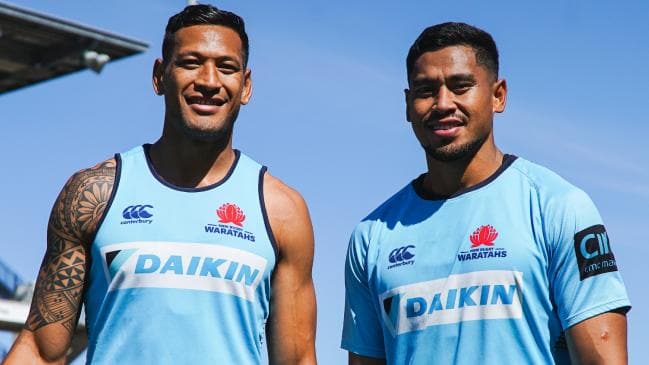 Israel and John Folau return to Rugby League and will play for Mate Ma’a Tonga.

The Chairman of the Tongan National Rugby League, Mr George Koloamatangi, today announced that both Israel and John Folau will play for Mate Ma’a Tonga in the Oceania Cup to be played in late October, early November.

Mate Ma’a Tonga are set to play Gt Britain in Hamilton, NZ on October 26 and will, one week later, meet Australia in Auckland at Eden Park on Nov 2, 2019.

Both brothers have registered to play league through the TNRL and are eligible to play in international rugby league fixtures.

It is understood that neither player is available for the International 9’s tournament to be played in Sydney under the auspices of the NRL on the weekend of October 19.

This is not the case for games played under the RLIF and therefore both players can be selected for Mate Ma’a Tonga.

Frank Endacott, Head Coach for Mate Ma’a Tonga said he was thrilled at the prospect of Israel (30) and John (24) being available to play.

“This is great news”, said Endacott. “These guys are great footballers and bring size, pace and skill to the team. They will make a huge impact in the team and provide exciting attack options all over the park.”

“This will be great boost to the internationals, and I cant wait to see the crowd support that this will generate from our famous Mate Ma’a Tonga supporters,” Endacott added. “And it is good to see the RLIF approving these players for internationals. This is great for the game.”

On 4 September, 2014 John Folau announced that he was quitting rugby league and switching to rugby union signing with the Sydney Rays. Following Folau’s move to the NRC, the New South Wales Waratahs signed Folau shortly before the start of the 2019 season, joining his brother, Israel Folau. He has since been released from that contract.

Folau played rugby league for the Melbourne Storm in the National Rugby League (NRL) from 2007 to 2008, where he broke the record for most tries in a debut year. He then played with the Brisbane Broncos from 2009 to 2010. Playing as a wing or centre, Folau represented Queensland in the State of Origin and Australia, becoming the youngest player to play for both teams.

Israel Folau said that he was excited about returning to Rugby League and being able to do that while playing for the Kingdom of Tonga was very special.

“I’m so grateful to have the opportunity to represent God, my family, my heritage and the people of Tonga,” he said. “I am thankful that the RLIF have accepted my availability to play.”

The TRNL have confirmed that football staff have been talking with players individually and confidentially and discussing availability for the upcoming Oceania series.

“We will field a great team,” said Chairman of TNRL, George Koloamatangi. “ I am sure the availability of Israel and John (Folau) plus the selection of other great players will bring out the fans to show their support in a way that only Tongans can do. Our fans are legendary in international rugby league bathing venues in a sea of red on many occasions.

I am sure the event managers will be rubbing their hands in expectation of more great international spectacles now that Israel and John (Folau) have confirmed their availability.” he said.