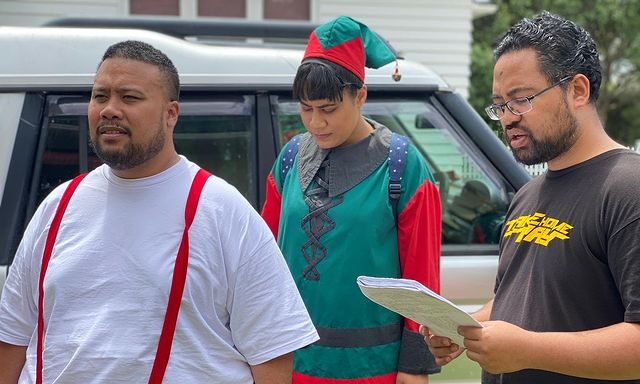 The Vaiaoga-Ioasa siblings are at it again. Director/Writer Stallone Vaiaoga-Ioasa and his Producer sister Abba-Rose have released a new trailer for their latest film Mama’s Music Box just in time for the Christmas break.

Filmed as part of the #Feature30Challenge, the filmmakers had only 30 days to create their film from scratch.

“The idea for the Feature 30 Challenge “was something we created ourselves,” Stallone said on 531’s Breakfast show.

“We saw at the cinemas there weren’t many movies being released, and we asked ourselves, ‘What would it take to make a feature film quickly?'”

With three films tucked firmly into their belts, the two wrangled together the same crew that helped them create Three Wise Cousins, Hibiscus & Ruthless and Take Home Pay. Despite this, Abba-Rose says they still faced many obstacles.

“The hardest part for us was the scriptwriting.”

“We were going back and forth the first week to 10 days just trying to nail down the story and also just trying to make sure that our community, our people would want to see. But what we came out of it with is something really special.”

Pasifika women leaders recognised at the 2020 Women of Influence Awards