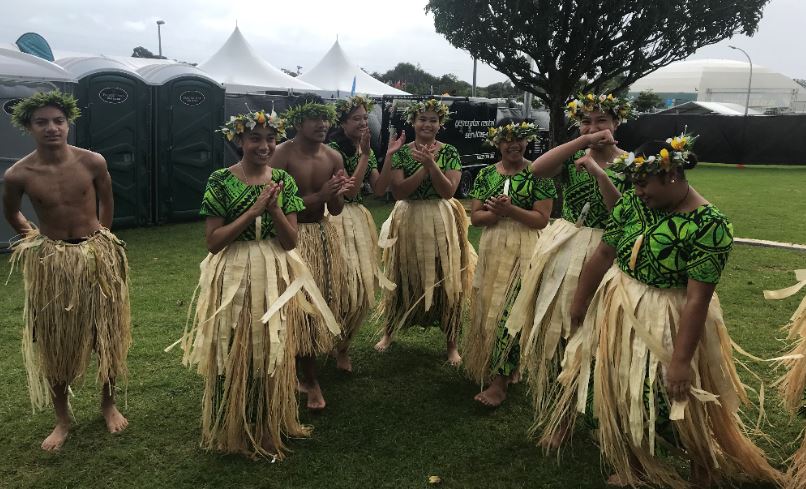 Among the 15 cultural groups representing Manurewa High School at Polyfest was their very first Tokelau Group. Despite having only 10 Tokelauan students out of the 2000 student population, Deputy Principal Rev Pennie Vaione Otto wanted to have the smaller Pasifika ethnic groups represented.

Taitu’uga Ed Hendrikse was the assigned teacher for the Tokelau Group. Although he is of Samoan-Dutch descent, Taitu’uga says it was an honour to be a part of it.

“It has taught me the need to support all our Pasifika ethnic groups, in particular our smaller groups who are at risk of losing their culture in Aotearoa,” he says.

Taitu’uga has been teaching at Manurewa High School since 2003. As a Whanau Leader (Dean) and one of the Mana Pasifika Staff Leadership Team members, he says “having the Tokelauans represent their culture regardless of their number was very important.”

“This was an awesome opportunity for the Tokelauan students and their community to showcase and have pride in sharing their culture, which is often not seen.”

Taitu’uga acknowledges his Year 11 Tokelauan student Sinuia Otto in putting together the group. Sinuia took the initiative and asked her older sister, Fa’avaefou Flower Otto, and her fiancé, Ofa Agaimalo, to become the tutors. The newly engaged couple, who are also past students of Manurewa High School, taught the Fatele.

“The fatele is celebrated in so many occasions,” Fa’avaefou explains. “For example, the pulotu/the composer could write a song about the sunrise, a flower in the midst of the island, the way the fisherman fish, love songs, to even Biblical stories. Still to this day we are performing the fatele written by our ancestors, and this is the beauty of it all.”

The Tokelau Group comprised of 15 students – 11 girls and four boys, with only five students of Tokelauan descent.

“The other students were Māori and from other Pasifika and ethnic groups,” Taitu’uga says. “They had open hearts to learn about the fatele and its importance and beauty in the Tokelau culture.”

Another addition to the team was staff member Ms Manaia Laulu. She is also of Samoan descent, and her mother is Tokelauan. Ms Laulu helped out with practices on Wednesdays and completing the documentation work with Taitu’uga for Polyfest.

Proud of making history of creating Manurewa High School’s very first Tokelau Polyfest Group, Taitu’uga was also moved he formed the only Tokelau Group to perform at Polyfest for 2021.

“We felt blessed that we were shown on Newshub on television, which was great exposure for the Tokelauan community,” he says. “We know that some people of our Tokelauan community, in particular our mothers [and seniors], were very emotional when they saw the fatele”.

Although the Tokelau community at Manurewa High School is small in numbers, Taitu’uga says the school has a continued commitment to connect with their Tokelau community and the smaller ethnic groups within the school beyond Polyfest. The school will hold Pasifika fono/talanoa and Zoom meetings throughout the year so that all Pasifika ethnic groups will have a safe space to have their say.

Looking to the future, Taitu’uga wants to encourage other schools to support their Tokelauan students and their communities to perform and honour the Tokelau culture.

“Who knows, we may have a Tokelauan trophy!”