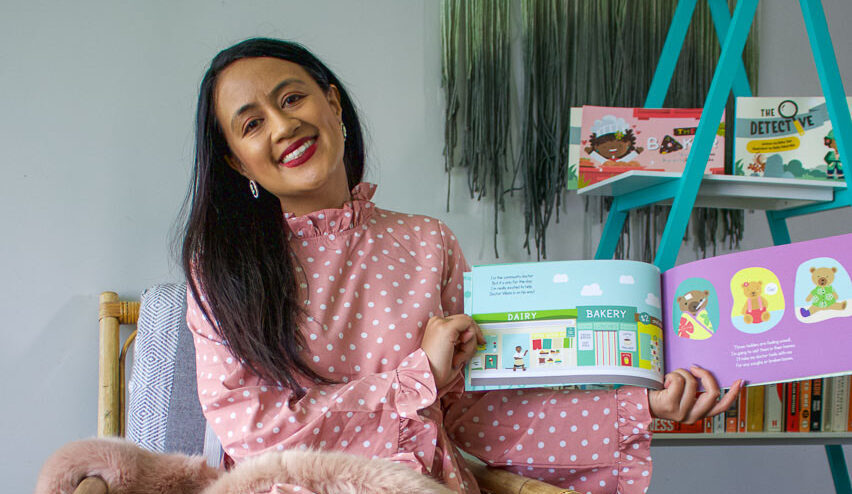 “When I was about 6 years old, I would write stories and make books for people as their birthday gifts.”

Her very first book, The Inventor, was published just last year and was met with much enthusiasm from parents, teachers and children.

With an emphasis on the underrepresentation of women, particularly Pacific women in STEM, it follows the story of a young girl who uses tools around the house to try and wake up her brother.

Illustrated by Kate Key, the book also features many familiar elements which many Pasifika children can relate to. “I needed the character to be brown and wear clothes that were easily identifiable as Pacific, so the flowers, patterns – everything,” Vaai says.

“Pacific children want to see characters that look like them. Equally as important, children from other backgrounds should also celebrate seeing Pacific children and stories too.”

“We need to diversify children’s literature and books are a fantastic way of teaching people values such as respect and empathy.”

With the success of The Inventor, today Vaai has launched three new titles to add to her aspirational Read With Me series for kids. “We have The Doctor, The Detective and The Baker,” says Vaai.

“Each book I’ve written is based on a Pacific child talking about what they want to be when they grow up.”

As a criminal defence lawyer, Vaai purposefully avoided “fluffy and superficial” topics, instead striving to write stories which contained aspirational and inspirational messages for her young readers.

Vaai recalls, “I remember when I had a few people tell me that ‘it’s a bit too heavy for a children’s book’.”

“The first thing that I thought was, ‘Wow. What a privilege it must be to be able to turn a blind eye to the issues that our children are facing’. Children are living in damp homes, undergoing surgery for Rheumatic fever and other third world diseases, watching their parents work 12 hour shifts and still not earning a livable wage.”

“What kind of example would I be setting if I asked people to just pretend that these issues didn’t exist, even just for one second?”

But if you’re thinking the series might possibly be too deep or profound for young minds, Vaai reassures the books are still jovial and feel-good.

“It’s still a children’s book and lighthearted, but I hope I’ve highlighted these particular experiences in a way that empowers people to think about what we need to do to make real and effective change.”

With new titles and stories in the works, can we hope to see The Lawyer anytime soon? “I don’t think I’m ready to write about that just yet!” she panics.

“It’s a little bit too close to home and I honestly wouldn’t know where to start. The book will probably end up being 500 pages long, titled ‘A transcript from Reina’s therapy sessions’.”

Click here to purchase the latest books from Reina Vaai.