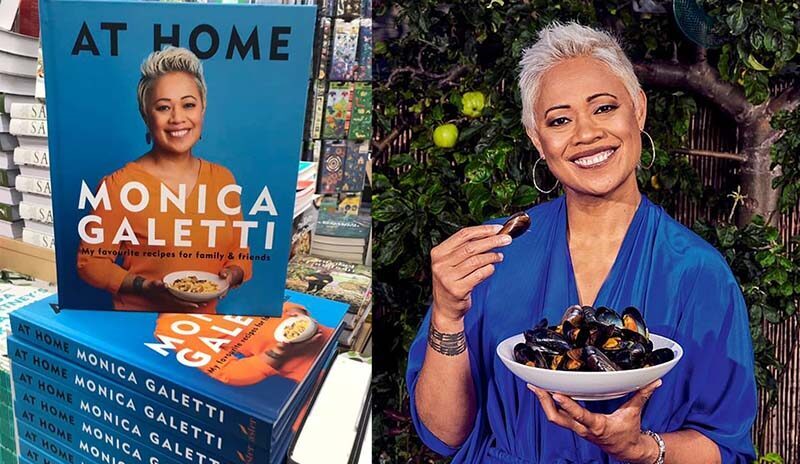 At Home: A personal look into Monica Galetti’s kitchen

Alice Lolohea catches up with famed Samoan chef Monica Galetti about her latest book At Home.

Monica Galetti is revered the world over for her extraordinary culinary skills and memorable television appearances.

Many know her as a co-host on the BBC series Amazing Hotels, or the no-nonsense, tell-it-like-it-is judge on UK’s Masterchef: The Professionals.

Others know her as the Chef Proprietor of her restaurant Mere, currently ranked as one of the Top 10 restaurants in London.

And if she wasn’t busy enough, Monica Galetti has added to her formidable career with the release of her third book, At Home: My Favourite Recipes for Family and Friends.

It’s a personal page-turner filled to the brim with comforting, celebratory and nostalgic recipes, all of which have at one time or another made their way into her own kitchen.

“I just wanted everyone to be able to feel like they could do it,” enthuses Galetti.

“That’s the whole idea of it, to try and articulate in a way that doesn’t scare people what to cook, and selecting recipes that we do at home as a family as well.”

As a rookie, I’ve always been nervous to cook for my family.

In my teens, when silicon bakeware became the new craze, I attempted to bake a banana cake for my siblings.

The result was so poor my older brother kept saying he would use the cake for his spare tyre.

But in preparation for this particular interview, I attempted what I thought would be the easiest recipe to try, Galetti’s ‘Best Scrambled Eggs’.

Needless to say they came out overcooked and a little dry.

“When it starts to cook around the edge, you need to stop, cos it’ll continue cooking.”

Galetti has also imbued her pages with similar support, and sometimes a small anecdote behind the dish.

From Masi Samoa, Pani Keke and Sua Fa’i, her memories preface a few of the Samoan recipes included in the book.

“I think those personal touches bring it to life. Food is always sort of reminiscent of memories,” Galetti enthuses.

She recalls how her parents would walk into the supermarket and purchase food for a whole village, “even though there’s only two of them at home”, she laughs.

“I always remember my dad just going in and grabbing the whole box of fa’i (bananas), and I was like, ‘He doesn’t wanna leave for anyone else?’ And then in the kitchen where the bananas are so ripe that they go black, there’s nothing else to do with them but to stick it in Sua Fa’i.”

“No one else would wanna eat it but Dad – he loves them that ripe.”

With Christmas season in full bloom, the timing of its release is near perfect.

I know I’ll be flicking through the pages of At Home, desperately trying to find something to cook for the family Christmas pot luck.

“Do you have any advice for rookies like me?” I desperately plead.

“Choose something that sounds like you want to eat it. Choose that and make sure you’ve got everything, but don’t panic,” Galetti insists.

“If you’re missing a certain spice or something, just do without or use what you have in your cupboard. Don’t be afraid and don’t panic about it! As long as it tastes good, don’t worry about how it looks.”

“If it doesn’t turn out the first time, practice makes perfect.”

At Home: My Favourite Recipes for Family and Friends is available to purchase at all major book outlets.