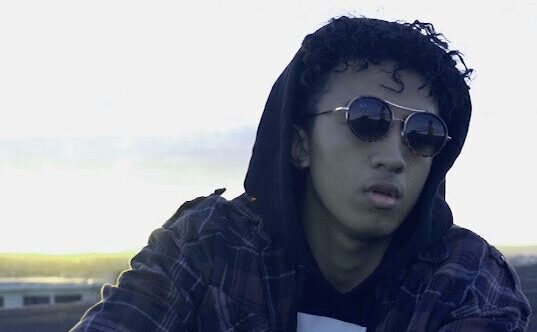 One to Watch: Q&A with Ōtara artist LIVELY

Samoan-Tongan artist LIVELY is among 21 Pasifika recipients of NZ On Air’s recently announced New Music Pasifika fund for his single ‘Climbing’. Ann-Tauilo Motuga caught up with the 21-year-old newcomer to chat about his music journey so far.

Tell us about yourself. Who is LIVELY?

My name is Lively Lifeimi Nili. My mother and father named me after the Bob Marley and the Wailers song Lively Up Yourself, as they were big music heads and fans of Uncle Bob. I have two sets of Grandparents, I’m the eldest of eight kids, and I got like a thousand aunties, uncles and cousins, but big families are just the norm for us Polys, as you know. Me, my parents and my siblings grew up in the middle of Ōtara and in Dawson, so you know it’s ‘Southside till I die’ with us.

I’m realising now that my name was perfect for me as my artist one. In real life, I’m very chill and laid back – the complete opposite of my name’s meaning. It’s only when I’m talking about or doing things I’m passionate about that I live up to it. It’s like what me and my cuz TJ Buford aka Creationkit say, describing ourselves as “an introvert that’s only extroverted when I need to be”, and on stage is one of those times for me.

When did you first start getting into music?

My father is SIAVANI who was in the band Cydel and is the founder of The Groovehouse, so growing up I was surrounded by music. I’ve been working in a studio since I was 11, but I only fully realised I wanted to pursue music when I was 16. I’ve realised that music is therapy for me. There’s a lot of pressure growing up in the hood, and I’m so used to bottling things up. But music always seems to release it all. Whether it’s making music or just listening to it, it’s kept me calm. I’m sure a lot of kids are like that.

I’ve learned so much about music when it comes to constructing a song too. Even now I’m still learning. With the EP L.F.M I released last year, I worked on it through the lockdowns. Because of the restrictions and low funds at the time, I wasn’t able to have someone mix and master the project for me. I had to learn it from scratch. It was probably the most humbling experience I’ve ever had, and I have only the utmost respect for those in the Audio Engineering field.

You’ve recently received funding from NZ On Air. How did you react to the announcement?

I had totally forgotten my team had submitted my song for one. I’d been so busy with work and making more music that when they had told me, I was both shocked and relieved. It feels like a win for me and my crew, especially coming straight from Ōtara. Getting to this point has been hard for us at The Groovehouse, because we’re independent. We’ve missed out on so many well deserved rewards, so hearing the great news made me happy for all the people that helped me get here. This is a step closer to putting it on for my hood. I know my music is good enough for these types of things, but it all depends on whether the people who make the final decision know that too. In the end, all you can do is keep working on your craft and hope for the best. All glory to God for opening this door for us. Shout outs to NZ On Air and those on the panel for listening.

We’ve been in and out of lockdowns for a year now, and I know how that may affect new artists in terms of limited gigs. How have you been managing yourself and your music during these unprecedented times?

In my opinion, it was a blessing in disguise. Though there were limited gigs and concerts, which is something most artists rely on to put food on the table, the lockdowns forced me to give myself my own music course. It gave me more time to work on my craft and explore the artistic side of music again. It forced me to learn new things in the realm of audio that in the past I would’ve let someone else do, which gave me that ‘Ground Zero’ experience. It made me fall in love with music all over again. I feel like a lot of music nowadays is saturated with materialism, politics, popularity and statistics, so much that the soul of the music is lost. Even I found myself slowly falling into that hole. So though it didn’t benefit me monetary wise, the lockdowns helped me regain the tools to maintain that soul in my music.

Now that you’ve received funding from NZ On Air, what are your plans for your music for the upcoming weeks/months?

Right now we’re planning a music video for my song ‘Climbing’. We’re brainstorming ideas and figuring out what we need to bring those ideas to life so when it comes to the time to shoot, everything goes as smooth as possible. But other than that, my plan is to keep grinding. I’ve still got a long way to go to where I want to be career and lifestyle wise. I’m working on new music that hopefully will be out soon, and good enough to be granted more funding in the future. I’m just grateful to be alive and doing what I love. For those out there trying to live out their dreams, keep going. Don’t give up, especially if you from the hood. Everyone has their time, so be patient and keep the grind up.

Besides music, what do you do in your spare time?

Other than being a musician, I’m also an actor. I’ve been in a few commercials, short films and films. In terms of hobbies, one of them is playing Video Games. From Halo to Tekken, I’m really into all sorts of video games and not trying to brag, but I’m surprisingly beast at competitive ones. Other hobbies I have are watching anime and reading manga. I grew up watching Naruto and Dragon Ball Z, and I’ve been hooked ever since. One of my favourites right now is Attack on Titan so if you know, you know.