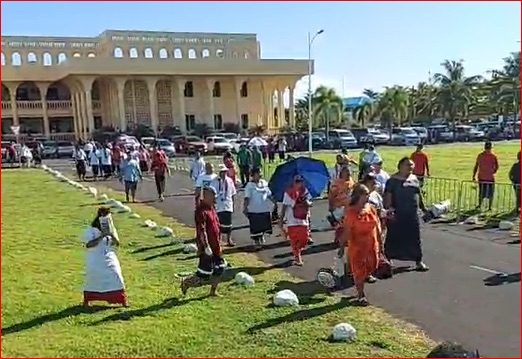 Samoa’s constitutional crisis deepened on Monday morning with the party that commands the majority of seats locked out of parliament, but still insisting it can form a government today.

The FAST party, its leader Fiame Naomi Mata’afa and a large number of supporters have gathered in a tent on the lawn in front of parliament house in Apia, where there is a heavy police presence. The officers are unarmed and wearing green shirts, RNZ Pacific’s correspondent said.

But the doors to the building are locked, with the clerk of the house and speaker of parliament insisting there is no sitting today – a decision that directly contravenes a Supreme Court order.

It’s the latest twist in a weekend of shock developments that have spiralled into the biggest political turmoil seen in Samoa in decades.

Parliament was due to sit today for the swearing in of MPs after the 9 April election. The sitting was ordered by the Supreme Court last week, after it overruled the Head of State’s decision to call a second election, in order to break a deadlock that resulted from the election.

But just before midnight on Saturday, local time, the Head of State, Tuimaleali’ifano Va’aleto’a Sualauvi II, cancelled today’s sitting of parliament without explanation. He is understood to now be in his home village of Matautu-Falelatai, while a constitutional and political crisis has come to a head in Apia.

In an extraordinary hearing yesterday, the Supreme Court again overruled the head of state’s decision, calling for Parliament to sit today. Under the constitution, parliament must sit within 45 days of an election. Today is the last day for this to be possible.

On Sunday night, the speaker of the legislative assembly, Leaupepe Taimaaiono Toleafoa Faafisi, a member of the caretaker Human Rights Protection Party, said he would abide by the Head of State’s call, not the Supreme Court ruling.

On Monday, Fiame and FAST party supporters went to parliament anyway, saying the HRPP was ignoring the rule of law. There was a heavy police presence, and supporters were singing hymns from the country’s struggle for independence more than 50 years ago.

Escorted by the police commissioner, Fuiavali’i Egon Keil, the chief justice and other judges walked to parliament to inspect proceedings, tried to open the locked door, and returned down the road to the courthouse.

“What we have just seen is the judiciary witnessing their ruling has not been upheld,” said Fiame in an address to the crowd. “The numbers have been met. We can continue with the process by legal means. We can convene parliament with 26 members of parliament.”

Soon after, the clerk of the house, Tiatia Lima Graeme Tualaulelei, arrived for a tense discussion with the FAST party, where he explained he was merely following instructions from the speaker of parliament and the caretaker minister of parliament.

The caretaker minister of parliament is the HRPP leader and caretaker prime minister, Tuilaepa Sailele Malielegaoi.

With neither side currently budging, the standoff looks set to continue well into Monday afternoon, with little certainty over how it will be resolved.

Pacific people get Covid-19 vaccine in the Hutt Valley