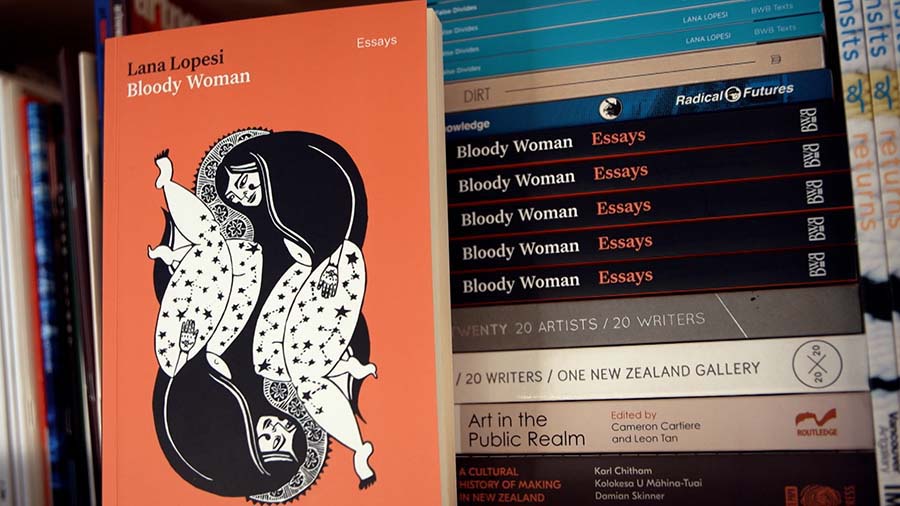 Dr Lana Lopesi is a celebrated author, Arts Editor at Metro magazine, a lecturer, mum of two and a Sāmoan woman. Her second book Bloody Woman, published in 2021, is a book of personal essays about being a Sāmoan woman, living in the New Zealand diaspora.

“The only way I knew how to have this conversation,” says Lana, “was to really just dig deep into the complex and complicated things that make up me and, by extension, makeup Sāmoan womanhood.”

Lana intentionally includes experiences of menstruation and terminations in the book; topics she recognises are more often discussed in whispered conversation.

“A lot of people are like, ‘how did you do that? How were you able to share so much?’” Lana reflects.

Part of her motivation to write the book was to speak into silences that exist because of shame.

“I think shame is such a huge part of contemporary Pacific identity,” Lana says.

“Shame around our bodies, around sexuality and around the practices that existed way before Christianity came into our islands.”

Writing about her own experiences was, consequently, a careful process which underlined her intuition that the book was needed.

“I realised if I was struggling to talk about this, that if I was having this reaction as a woman, what about everyone else?’

“I wanted to really research it well, but also bring all these different things together because I am writing from my perspective, which is someone who lives in this house in Ranui in 2022, who’s Sāmoan and Pākehā, has a university education, is a mum of two.

“I’m writing about cultural concepts from that perspective and it’s not to say that’s the truth, but it’s one offering into that space.”

Turning to look at the fear of ‘speaking out’, itself, became a guiding insight.

“Tautalaitiiti being about the idea of speaking above your age,” says Lana.

“So if feminism is about the will to speak, is being Tautalaitiiti a feminist quality?

“Once I started to think about Tautalaitiiti as a methodology, it just freed up everything.”

Including a line of questioning about the role of women in relation to Sāmoan culture and christianity, ultimately, Lana asks – what is Samoa and what is church?

“Actually pulling those things apart is so difficult because today they are married so closely,” she says.

“For a lot of people, that’s a great marriage. But Sāmoans are not all the same and we don’t all have the same religious beliefs. So for me, I had to really dig deep and ask that question, what is culture and what is church? The book doesn’t necessarily answer that question, but it at least asks it.”

The response to Bloody Woman has been resoundingly positive from literary and cultural commentators and most importantly to Lana, Sāmoan women. Some of whom got in touch with Lana to share their response.

“I’m really excited to see what will come from this” says Lana.

“I feel there’s a groundswell of voices about to rise up and I think that the biggest hope for any project or publication is that it will actually make more voices come forward.”