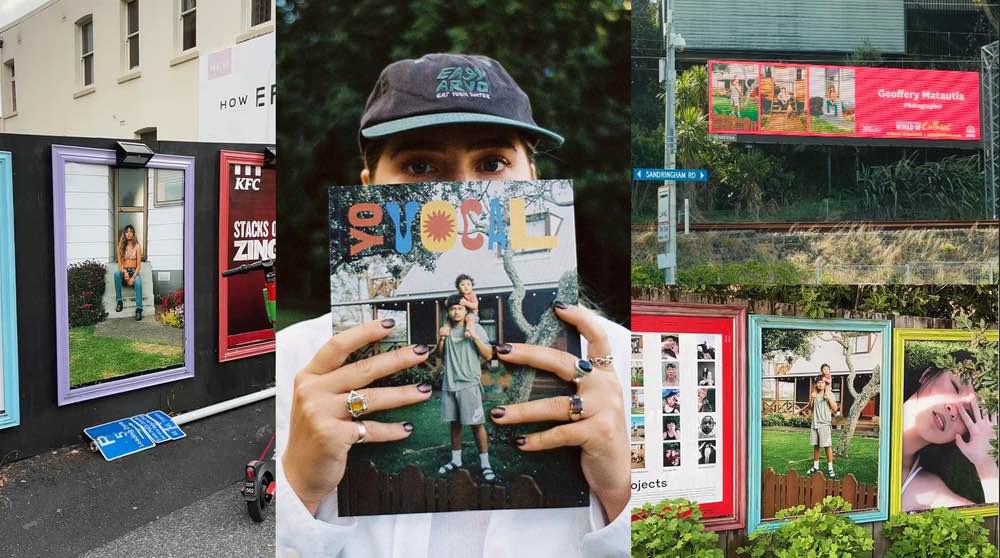 What started as a passion project born out of boredom in lockdown has become an array of opportunities for one South Auckland photographer.

Southsides (also known as Geoffery Matautia) took to Instagram last year in October with his first front yard portraits where it instantly gained a following. In under a year, he had photographed more than 50 portraits of South Auckland locals while getting noticed by the Auckland City Council which asked that his portraits be a part of their ‘Making Art Public’ (MAP) project.

Thanks to the MAP project, you can spot some of Southsides’ portraits on display in a small space next to Countdown at Hunters Plaza, Papatoetoe, as well as on the digital billboard across Mt Eden Stadium on Sandringham Road.

Other local areas include Hari Superette Dairy in Puhinui and the Symonds Street Bus Stop across Mount Street.

And if you think Auckland Council was recognition enough, Southsides was approached by NZ Geographic, and Yo Vocal Magazine to feature in their publications.

“Initially [YVM] just wanted to include some of my portraits in their fourth issue, but they decided to also feature one of my photos of Dallas & Phoenix on the cover.”

“Now it’s in a lot of people’s homes all over New Zealand.”

A physical copy of the Yo Vocal Magazine fourth issue can be purchased at the Crushers Shop on Karangahape Road. A copy of the December issue of NZ Geographic magazine can be found at your local Countdown (if in stock).

The young creative says it feels so “wholesome” knowing he has a hand in sharing the people and the unheard stories of South Auckland.

“I want these people to be at the forefront of everything that I do, even if it means I just remain as ‘Southsides’ or just my profile picture on the internet.”

Besides doing photography as a hobby, Southsides also designs and prints shirts, as well as creating video content as a freelancer. One of his most popular pieces was a Rihanna tee that sold out within 24 hours.

Although he hasn’t become his own official clothing/creative brand, Southsides says his creative projects are just a “fun and creative outlet”.

“If people are keen to buy it, then I’m cool with making it whether it’s shirts, hats, shoes etc,” he says.

“I like to have my hand in a lot of things, also I get bored really easily. I have an Instagram called southsides.studio for a lot of those spontaneous projects, but it’s cool seeing people wear the things I have designed and made.”

For the South Auckland photographer, his passion for creativity stemmed from creating bebo skins around the age of 12.

“I was interested in technology and the internet, then I realised I was a visual learner, so I was drawn to everything that had to do with art, design, colour etc.

“I actually have never taken photography as a subject or class so it’s kinda funny that it’s my main outlet. I’m sure a lot of the settings when I was taking the portraits were not technically the best.

“I did end up graduating uni with a Bachelors of Design, majoring in Communication Design so the creative stuff has been happening for a while, I just like to do a lot of things to express that.”

With so much recognition from his community and the council, Southsides says his favourite part of his portraits series is “seeing how fast you can create a sense of connection by the simple fact you both are from the same neighbourhood”.

Southsides shares that, although he is proud of his achievements, he still shies away at the thought of so many people seeing his work.

“I’m a ‘don’t look, it’s still unfinished yet’ person and I always will be,” he explains.

“But in saying that, I am grateful for all the opportunities that I have been given over the past few months. I guess now it’s just time for me to share those opportunities with the people around me so we can all move up – Network across, not up!”.

To see more of Southsides portraits and future projects, follow the accounts below: