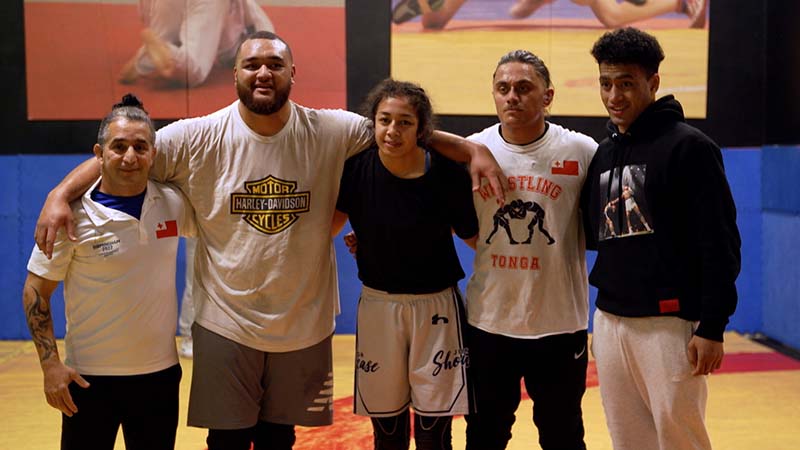 The Commonwealth Games starts in Birmingham, England in just over a week and for the first time in its history the Kingdom of Tonga is sending a wrestling team.

It’s a cool winter evening in Auckland, and members of the Tongan wrestling team are training with New Zealand squad members at a gym in Te Atatu.

Among those training is Australian-born Tongan Sione Sika who has made a lot of sacrifices to be ready for the games.

“I quit my job in Australia just to come here and train under (Coach) Andy and the rest of the team,” Sione says.

“Nothing good is ever easy so a bit of trials here and there just makes us stronger, I guess. I’ve been away from my wife and kids… it’s pretty hard, pretty nervous.”

A former MMA Professional, team member John Vake has returned to a sport he started out in.

“It was my first sport I had done or my first martial arts so it was just about coming back home I guess and getting back to my roots.” says Vake.

Another member of the team is 18-year-old Tiger-Lilly Cocker Lemalie, who fell into the sport completely by accident.

“They offered it at my brothers boxing gym and I wasn’t into the boxing but the wrestling looked like fun,” she says.

Tiger-Lilly’s mother Clara Cocker Lemalie is proud of how far her daughter has come.

“I am 100% proud, I mean my whole family’s proud of her especially my dad.  He always envisioned one of my kids representing Tonga, never knew it would be Tiger-Lilly but that’s what’s happening,” beams Clara.

Team Captain Aaron-Joseph Leha’uli says it’s important for the growth of the sport in the region to attend the games.

“Especially for the Commonwealth countries.  Countries like Tonga, Samoa and Fiji. It’s important for us to build not only wrestling but sports itself.

“You know, like Tonga for example, for us to be able to be on the world stage and to compete at these high-level things it’s very important,” Leha’uli says.

With all that Tonga has been through in the last year, the team wants to inspire its youth to give back to the Kingdom.

“The biggest thing is going out there and doing it for Tonga 100%. For the Tongan kids to look on the TV and see our flag there and someone doing it, I can’t even explain the impact,” says Vake.

Representing Tonga for the first time, some are finding it slightly daunting, but are keen to make history.

“I don’t cry that often and I’m tearing up right now, it’s very special, very special. Especially what our Tongan people have gone through in the last year. So, this is as much as were honouring our family and our ancestors and stuff, this is for the Tongan people,” says Leha’uli.

And the team are confident of bringing home a medal.

On a more serious note, John Vake agrees: “I’m fighting for my family, they really need a reason to smile and that’s what I’m fighting for when I’m there, and I feel sorry for the guy that’s going to try and take that from me.”

Proposed law to improve wages and conditions for low-paid workers